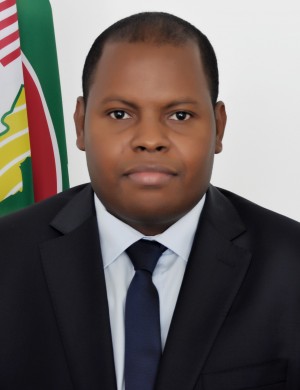 Dr. Isaias Barreto da Rosa is the Commissioner for Telecommunications and Information Technologies for the ECOWAS Community. He was born in S. Domingos, Cabo Verde, on 4th of November, 1976.

Dr. Barreto da Rosa holds a Licentiate’s degree in Computer Science from the University of Lisbon, in Portugal and a Masters in Management Development, from Euro-Arab Management School, Spain as well as an Advanced Studies Diploma in Education and Human Development from the University of Santiago de Compostela, in Spain. He did his Doctoral Degree in Education and Human Development (with honors) from University of Santiago de Compostela, Spain and later obtained a Post doctorate in Informatics from Tallinn University, Estonia, addressing the issue of enabling mobile access to digital libraries in digital divide environments. He is a Cisco instructor for CCNA and IT essentials, by the University of Central England, United Kingdom and Nelson Mandela Metropolitan University, South Africa.

Prior to joining the ECOWAS he worked as Software developer at the Center for the Study of Information Problems at the Portuguese Catholic University, Portugal; researcher and lecturer at the Tallinn University, Estonia; professor at the University Jean Piaget of Cape Verde for 13 years, where he also assumed several other responsibilities such as head of the unit (department) of science and technology, Director of the Technological Division; Director of the Digital Education Lab, Cisco Academy Manager, Microsoft IT Academy Manager, etc. Dr. Barreto da Rosa has several research papers published in journals and proceedings of international conferences.